Consent to the use of Personal Data and Cookies

If you give us your consent, data may be shared with Google.

The ability to move the taskbar around is important to many users, especially if you have a 16:9 screen, and/or use websites with fixed headers a lot. Perhaps even more so for those of us who has a solid background in GNU/Linux, maybe Ubuntu in particular, which has embraced a left-configured taskbar by default. In my own case, I think it was actually Ubuntu that helped open my eyes to the vertical taskbar.

Windows has always had a horizontal taskbar; I am not sure if this is a leftover from the 4:3 days, but it does not suit a 16:9 screen very well. In fact, even on older 4:3 screens it's still horrendous because of fixed horizontal elements, in particular headers on websites. Far too often, and probably for wrong reasons, websites will have a fixed header at the top of the browser window, and/or other fixed elements that takes up screen real-estate; add all this to the height of the browser UI elements at the top, and you sometimes don't have much room left for the viewport.

It gets even worse, near-impossible to use a website actually, when users have a higher DPI or text-size setting on their systems.

The ability to move the taskbar helps to mitigate some of the problems caused by fixed top-aligned elements on websites — and there actually is a way to get the movable taskbar back.

How to move the taskbar to the left in Windows 11

You may already have heard about the broken registry hack. It will not work. But it seem to be mentioned everywhere regardless. Also, users risk messing up the registry. So, please do not recommend it to users!

Instead we are going to replace or patch the Windows Shell, Explorer.exe, with a fixed version. There are a couple of roads you can go; if you prefer open source like me, then ExplorerPatcher is the way forward, but you may also like the extra features in StartIsAllBack.

There is a open source program called ExplorerPatcher that you can install to bring back the missing taskbar functionality from previous Windows versions. You can download the program from GitHub on the above link.

The properties of ExplorerPatcher allows you to adjust various things to your liking:

Here you can switch between the Taskbar style of windows 10 and Windows 11, and configure a Primary- and Secondary taskbar for different screens. Etc.

There is also an option to chose between always combine, combine when full, or Never combine for taskbar icons; the problem is, if the taskbar icons is configured to never combine, it will cause Windows Explorer to change icon when navigating certain directories, which is actually extremely frustrating, because your eyes will be scanning for the default File Manager icon, but now it suddenly changed to a music icon. Again, Microsoft forces us to choose between pest and cholera!

Note. If you get a problem where Windows Explorer changes icon when navigating the user folders, such as Desktop, Downlods, Documents, and Music, then you may be able to fix it by selecting the Always combine option for Combine taskbar icons on primary taskbar.

While StartIsAllBack is closed source, it comes with a few extra features such as Segments and Centered task icons, allowing you to center the icons even in vertical mode. 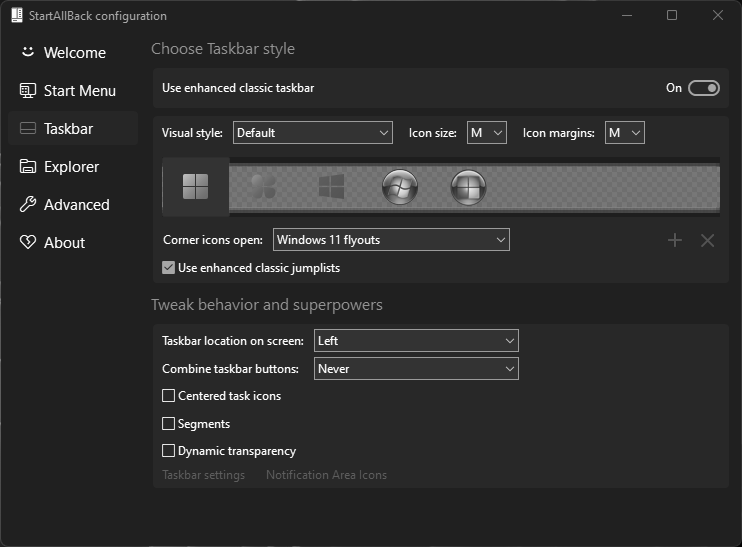 If you think startallback and ExplorerPatcher looks suspiciously similar, then it is because they probably do. And, if you have been in the "Windows game" for long enough, you will also know that some open source programs has been re-branded and re-packaged by scammers trying to make a profit by selling software that they really did not make themselves. If my memory does not fail me, I think this has happened to open source video converters.

But, this is not so in this case; ExplorerPatcher is actually inspired by StartIsAllBack, which is the older one of the two.

You can also read about a registry "hack" in some tutorials, but last I tested it, I just could not get it to work properly. It basically only allowed me to move the taskbar to the top of the screen, which is not really any better than having it at the bottom.

Classic Shell and others

Replacing the default shell (desktop), in Windows used to be a fun thing to do for modders, but recent versions of Windows has apparently made it more difficult. Traditionally the desktop environment has been handled by Explorer.exe, which is really just a program like any other program on the system. Modders simply figured out a way to replace the default file with their own, sometimes bringing useful enhancements.

There is also a program called Classic Shell, which brings back the start menu from older Windows versions. I personally do not care about that, since I just want the ability to left-align the taskbar, but if some of you have ever thought to yourself: "I really miss the Windows 9x Start", then go ahead and have your fun with that — just count me out.

Besides, a major selling point for some of these replacement "shells" has always been modifications to the default "start menu". Some might allow you to categorize things in sub-menus, and bring cool graphics and animations; I do not care about those things or features anymore, since I typically just search for the things I need — but I had a lot of fun replacing the default shell when I was younger.

Personally, I love the idea of being able to replace various Windows components, because Microsoft does not always bring us the best of the best. Total Commander is a replacement for Windows own File Handler, in the same way you can replace the entire shell.

Note. The command line is also sometimes referred to as "the shell", but it is actually a different component.

Aston shell and Litestep for XP

A couple of really old examples are Aston2, also known as Aston Shell, and Litestep, but they do not seem to work in Windows 10.

I remember having a lot of fun with Aston2 years ago. Those were the days.

Now I guess I just prefer to keep it simple. I hardly ever open a program by using a traditional shortcut; instead I use the search feature in Windows, as I would in Gnome or KDE gnu/linux systems.

Apparently, this sort of customization is harder to do in Windows 10 and 11. But, interestingly both astonshell and Litestep websites are still active.

Is Microsoft going to fix the taskbar?

This is a good question. I have not been able to find anything that indicates they are going to fix these issues anytime soon.

I tried searching the official Windows blog for answers without finding anything about it — and I mean not even a small mention! That is just super strange, because a lot of users have been complaining about it.

The only thing I was able to find is from 7 months ago, in the FeedBack Hub, a suggestion with more than 4600 upvotes got a official response by Microsoft Engineer Jen Gentleman:

We'll be continuing to evolve Windows 11 and its features based on feedback like this, so thank you so much for taking the time to give us your feedback!

This response was almost a non-response. I was hoping to read what their own thoughts behind the nerfed taskbar might be, and possibly, what they are plan to do about it (if anything).

The official specifications also mentions the following about the taskbar:

Alignment to the bottom of the screen is the only location allowed.

Only location allowed? Why? It's basic UX!

The reason why the taskbar has been made worse may be because Microsoft decided to remake it from the ground up. This does not justify the removal of foundational and basic features that users depend on, however.

Could it be for branding purposes? Maybe. But that would also be a reason to distrust proprietary software. I have already mentioned why I stopped using closed-source e-mail clients here:

First support for Outlook Express was discontinued, and later when Microsoft also ditched Windows Live Mail to replace it with a worse, built-in, mail app in Windows...

It is also not the only problem with the taskbar; another issue is that drag & drop is apparently not working properly, and although I personally do not rely much on that, it's still not nice to read about.

When you upgrade Windows, you do not expect it to be made worse; at a minimum, if features are removed, you do at least expect them to be replaced by new and better features.

The fact that this simple feature is not implemented in Windows 11 is just mind-boggling stupid — it is basic UX! Microsoft knows this.

Vertical space is under pressure, especially on the web, but horizontal is not; and so, vertical taskbar beats horizontal taskbar.

That suggestion on the Feedback Hub is up to almost 10k upvotes and has 375 comments, but MS still hasn't provided any meaningful response. I just built a new PC with an Alder Lake CPU and installed Win11, but this will be my development machine for work, so I can't take the risk that a Windows update will break any of these third-party workarounds such as ExplorerPatcher, etc. I'm about to install Win10 with the CPU's E-cores disabled until MS decides to stop releasing what are essentially beta builds of Win11. :(